NEW: It Depends Who You Are 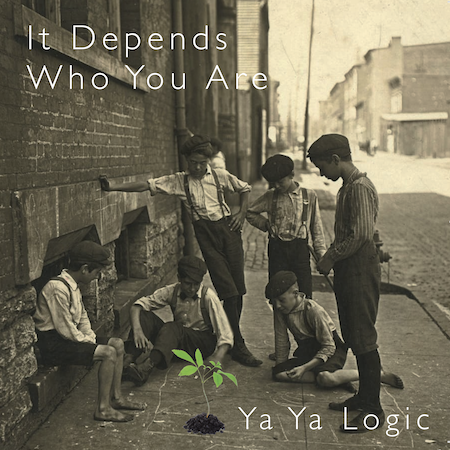 The roots and musical influences of Ya Ya Logic go back to the 1970s and 80s. Paul and Ian were best mates at school in Herefordshire when they recorded their first songs on cassette. It was psychedelic and conceptual, complete with felt pen drawn garish orange inlay card. Paul was loving the British Blues boom, Ian dug the Stones and they both loved Bolan, Bowie and Mott the Hoople. In the 80s Martin (whose heart really belongs to prog rock) was down south playing drums – and any other instrument he could get his hands on, leading to a spell as front man with cult London-based Suites From Strangers. Jonathan meanwhile was over in Birmingham, most days plugging into a red Marshal combo and thrashing out Dr Feelgood riffs at top volume until his fingers – and ears – bled.

In 2015 Martin moved in next door to Paul (Paul and Ian had both separately moved to West Malvern back in the 80s and 90s). On finding his neighbour played guitar and had a bunch of original songs, Martin, a serial collaborator, recorded an album of them both playing their own stuff in a studio Martin had set up in his garden. A few weeks later, following a night at the local West Malvern Social Club, Martin invited Jonathan (who had just moved in across the road) to jam along. For a short while the three of them recorded their own songs with Paul playing rhythm guitar, Jonathan getting to grips with single note runs, and Martin doubling up on drums and bass. Eventually Paul's old compadre Ian, who had been busy gigging with another band, became available to take on the bass. Ya Ya Logic – four blokes who found themselves occupying the same place geographically, philosophically and temporally – was complete.

In 2017 Ya Ya Logic released their first album "Climbing Trees". This was followed in 2018 by "Own the World" and in November 2019 by third album "It Depends Who You Are."